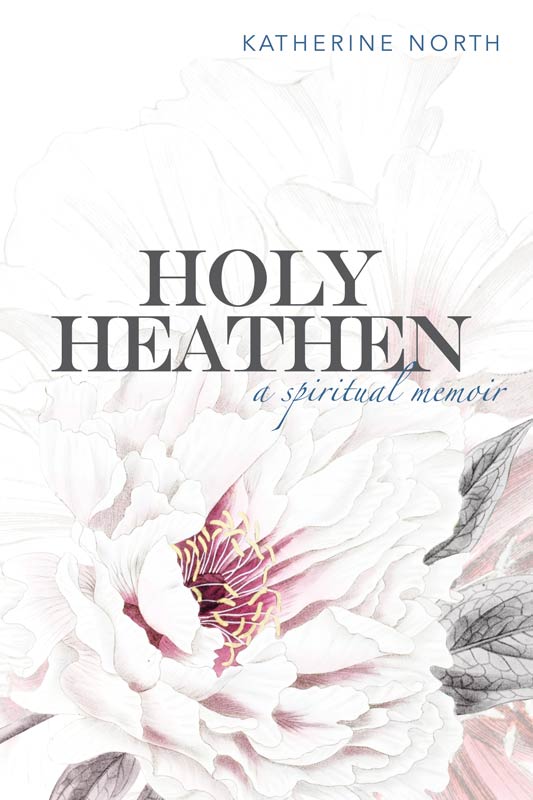 From divinely miserable to damned happy:
A tale of reckoning, personal redemption, and love-over-dogma epiphany

As a child, Katherine North had a terrible secret: she couldn’t feel Jesus in her heart. For the daughter of Christian missionaries, this was a problem indeed.

Holy Heathen is the origin story of heathen mystic and trailblazing life coach Katherine North. From growing up as a “Third Culture Kid” in an evangelical mission in Japan to discovering feminism at Bryn Mawr College, she grapples to find the true meaning of belonging when she doesn’t fit in anywhere.

Her path spans continents, featuring an unlikely acting career in Japan on the stage, a stint in Chicago amongst mid-nineties Beat-era revivalists, marriage and divorce, church and sex, healing and earthquakes, spiritual awakening—and finally, the call within her that she’d forever yearned for.

Katherine North became a life coach because she realized that she’d always had “tell me your secrets” tattooed on her forehead in invisible ink anyway—so hell, maybe it was time to go pro. She’s a queer feminist, mother of five, and made an award-winning documentary with her husband Nick North called Just Another Beautiful Family. She swears a lot but also cries at diaper commercials. This is her first book.

“As someone who grew up with three ministers in the family, going to church two or three times a week, Holy Heathen tickled my funny bone, triggered some painful memories, and touched my heart. With the sensitivity of a wounded child, the compassion of Quan Yin, the mystery of a mystic, and the wit of a stand up comic, Katherine North shares her poignant story of trauma and triumph as a child growing up in a missionary family in Japan. Yet she never casts herself as the victim, always illuminating the divinity in the humanity that left her feeling painfully squashed during most of her childhood. This is no sob story about a little girl made to sell her soul to Jesus. It’s an exquisitely-written tale of redemption from a wise woman who found her way back to Divinity through the soul of nature. In an animate universe filled with magic, Katherine finds herself. Home at last, she discovers that a loving Consciousness – call it what you will – has been there all along.”

– Lissa Rankin, MD, New York Times bestselling author of Mind Over Medicine and The Anatomy of a Calling

“Katherine’s memoir brings you to tears, laughter, and deep quiet, as you travel with her through her own personal Hero’s Journey. You will reach for your own truth, as you celebrate with Katherine for finding hers. An entertaining, powerful read for the heart and soul.”

“This book blew me away with its beautiful storytelling and its incredible message of hope. I’ve never read a book about spirituality that read like a suspense novel! It’s going to blow the roof off the self-help world. Every coach I know needs to read it– it’s going to become a classic in the field.”