Let’s pull back the curtain 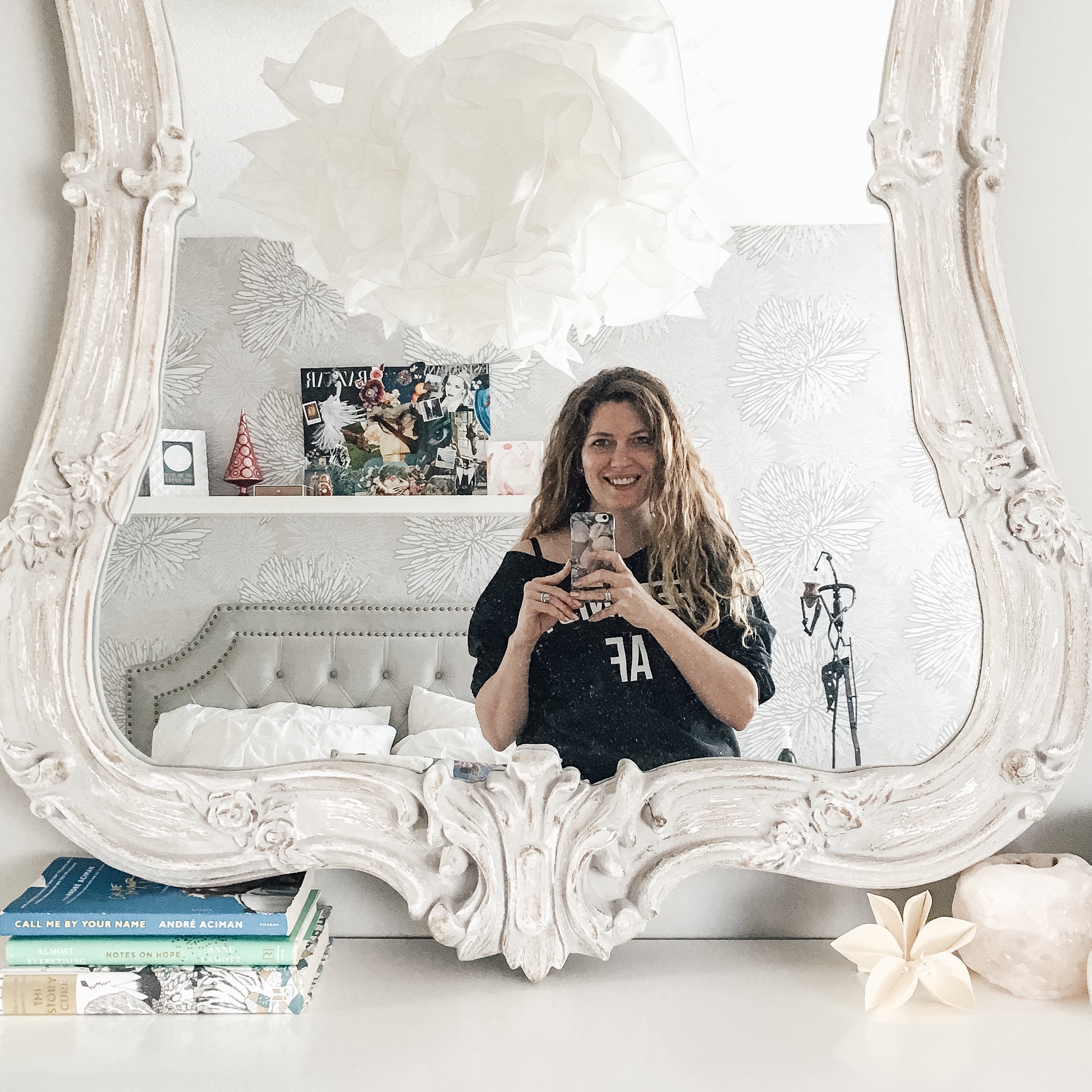 Today we’re going to pull back the curtain. I’m going to tell you some stories about what it’s like behind-the-scenes for some extraordinary women. Because aren’t you always dying to know what’s REALLY going on behind the impressive accomplishments? Behind the witty twitter posts, the gorgeous Insta feeds, and the intimidating LinkedIn polish? Me too!

We always hear about all the shiny public things people do: break 7 figures, sell a book, launch a top podcast, land that promotion, raise $10 million in seed money. A couple of weeks ago I wrote about how this usually makes me feel slightly ill with comparisonitits.

Don’t worry, this is not that kind of year-end-wrap-up!

(And if you’re feeling a little comparisonitis yourself, go watch the replay of the free class I taught this week! People are telling me it’s making them feel 1000% better about this past year.)

Today, I want to peer behind the shiny outward accomplishments and pull back the curtain to show you how some real women get extraordinary things done.

It isn’t magic…and it isn’t luck…and it isn’t just hard work, either. I could call it “wisdom,” or “being fully resourced,” or “tenderness+tenacity”– but instead I’m going to just tell you some stories about what it’s like behind the scenes for some of the strong, fierce women I have the utter honor to work with.

For starters, I want to tell you about the dear, wonderful client of mine who has been pummeled by life the past few years. She went through a wretched divorce that dragged on and on and ON. She felt exhausted and futile most of the time. She has two kids and one of them has special needs that make parenting extra difficult. Like, quantum difficult. Like, take your normal tantrums and moods and bedtime struggles and multiply them by 100. Mostly, this beloved human feels like she just goes through the thankless daily round– driving her kids places, talking with their schools, arguing about health insurance with people on the phone, wiping snotty noses, navigating the soccer practice calendar tetris, and making dinners that no one will actually eat. Mom life. It’s exhausting and no one ever gives her any positive feedback (no job reviews for moms, no gold stars, no raises) and as soon as she gets the roof fixed, now the furnace is broken. One damn thing after another. Relentless. But then? Listen to this. One day, she’s driving her kid to school. The teen says, “We talked about divorces today in health class. The other kids were talking about how hard it was to have their parents badmouth each other. They felt all conflicted. And I realized… you never did that. You never made it harder on us.” Oh, mama. CUE THE FUCKING ANGEL CHOIRS. I cried buckets when she told me about this moment. This is why it’s all worth it. This is the legacy she’s leaving, one plate of uneaten vegetables at a time. She is courage and integrity in action, this woman.

And I want to tell you about another beloved kindred spirit, who has worked so hard for so many years on her art that she is at the tipping point where people are calling her an “overnight success”….after a decade plus of steady, faithful creative output. I’m not going to tell you the field she works in, but I will tell you that recently she sat in meetings that would BLOW YOUR MINDS if I told you who was in them. She is taking her career to the next level in a way that is just a fantasy for many people, and she’s doing it by creating things that make the world a better, more just, kinder place. (No easy feat, my friends.) And yet what no one knew about her as she jetted off to these glamorous mind-blowing meetings is that in the midst of all of it, she has been dealing with heartbreak after heartbreak. It’s a private kind of heartbreak; not the kind you tell the world. And so again and again she grieves, and she wraps her tender body in soft blankets, and rests; and then she gets up again and goes out and shines her brilliant beacon out into the world. She is courage and integrity in action, this woman.

And let me tell you about the woman who puts on her sharp suit and her killer heels and goes into the office every day to a big company in a big city and she does her job and she also watches out for all the women who will come after her. She helps shape policies and draft language that will impact the ability of every person who ever works at the company to succeed and thrive through life’s milestones like sickness, parenthood, and loss. She is making sure that hard work and creativity and results help move people up the ladder of that huge corporation, not invisible bias and old-boys’ networks. And she does it with such grace and humor that she leaves them laughing even as she reshapes their understanding of how work should work. She is such a boss. I’m going to convince her to run for office one day. But in the meantime, she returns home to a painful limbo as she and her beloved spouse figure out how to move out of a marriage that is no longer working. They won’t live in estranged limbo any more, which means that they either need to fundamentally change their relationship or walk away from it. It’s deep and uncomfortable work that requires her to dig back into her history, into her inherited beliefs, and to be wildly courageous about naming and declaring what she wants for her future. She navigates both worlds with warm tenderness and the fierce steel of her determination and tenacity. She is courage and integrity in action, this woman.

And finally, I want to tell you about the rising star who has the formidable task of bossing around people who are mostly older and stodgier than her. She kicks ass at work day in day out, just like she has for the past few years. She gets tired but she doesn’t stop. She’s at the point now where it’s hard to check things off her list because they’re all big enormous projects that will stretch on for years. It’s like steering a giant ship across the wide blue sea, where there’s precious little dramatic progress to report: “Still ocean this week….yep, two weeks later, stillllll ocean.” But that’s because she’s getting really big things done, shifting big energies in the world. And what’s happening invisibly, inside her, is even bigger. While the outside of her life might look the same— same job, same company, same house— she’s done a major renovation on her own insides. Where there was constant pressure and anxiety, there are spots of peace and contentment. Where there were tangled rooms full of other peoples’ judgments and expectations, there are great wide open swathes of potent possibility. While on the surface nothing might seem to have changed, her experience of inhabiting herself is vastly different. “It feels so different in here,” she said the other day— nothing short of a quiet miracle. She is courage and integrity in action, this woman.

I love these women so much.

I FREAKING ADORE THEM.

You can’t help but watch someone choose courage and integrity and kindness, again and again, without falling deeply in love with the beauty of their hearts and spirits. And as their coach, I get to reflect back to them a little bit of that beauty. I get to remind them of who they are when they get tired and forlorn and forget. I get to help them remember where they’re headed when they’re covered in mud and the brambles are waist-high.

(Also, I remind them to take naps. One of these beloveds once said, “I really need someone in my life whose only job is to remind me to be KIND to myself!” And another one said, “This whole being-nice-to-my-insides thing feels so scandalous and ridiculous, except that it also totally works.”)

Because here’s the thing. No matter what, life is complicated and messy. For every single one of us.

We are always being invited, and sometimes we’re just straight-up required, to become bigger versions of ourselves than we ever thought we could be. Some of this will show up on your resume, but a lot of it won’t. And it’s JUST as important.

Behind the public triumphs, people show courage in the humblest, most private choices.

Walking out of the room before you say that thing to your kid that you can’t take back.

Sitting in the uncomfortable pause at the conference room table when everyone expects you to acquiesce….but you hold your ground with gracious grit.

Saying that scary truth out loud even though it’s going to make everything more complicated.

I want to wrap my clients up tight and safe so life won’t hurt them, but that’s not how life works. …LIKE, AT ALL.

So instead we wrap them in tenderness and kindness EVEN AS life tosses them around with unexpected challenges and surprising joys. We let them fall apart so that they can put themselves back together. Life keeps getting bigger and more interesting, and they keep getting stronger, fiercer, wilder, and wiser.

I don’t want to celebrate their outer accomplishments, fabulous as they are. What I want to celebrate is the courage and integrity they show when life gets hard. I want to honor the faith it takes to keep going in the dark when no one else can see you and it feels like you’re getting nowhere. And I want to bear witness to the fact that most moments of heroism are as simple as taking a deep breath and turning, once again, toward where you want to go.

So don’t forget to celebrate that courage in yourself.

Have faith in yourself, even if you’re in the dark right now.

Honor that holy stubbornness in you that keeps going when you feel like you’re getting nowhere.

Bear witness to your own daring and heroic self as you, too, turn again and again toward where you want to go.

That’s courage and integrity in action.

And you know, dearheart, we all need support. Even courageous badasses. In fact, especially courageous badasses. If you’d like me to be your coach and walk with you through this messy wonderful thrilling terrifying being-human-adventure, get a jump on the year-end rush and put in an application so we can talk about it. I’ll help you make everything you do next year bigger, braver, fiercer, and more profoundly tender than you ever thought possible.