A gift for Future You 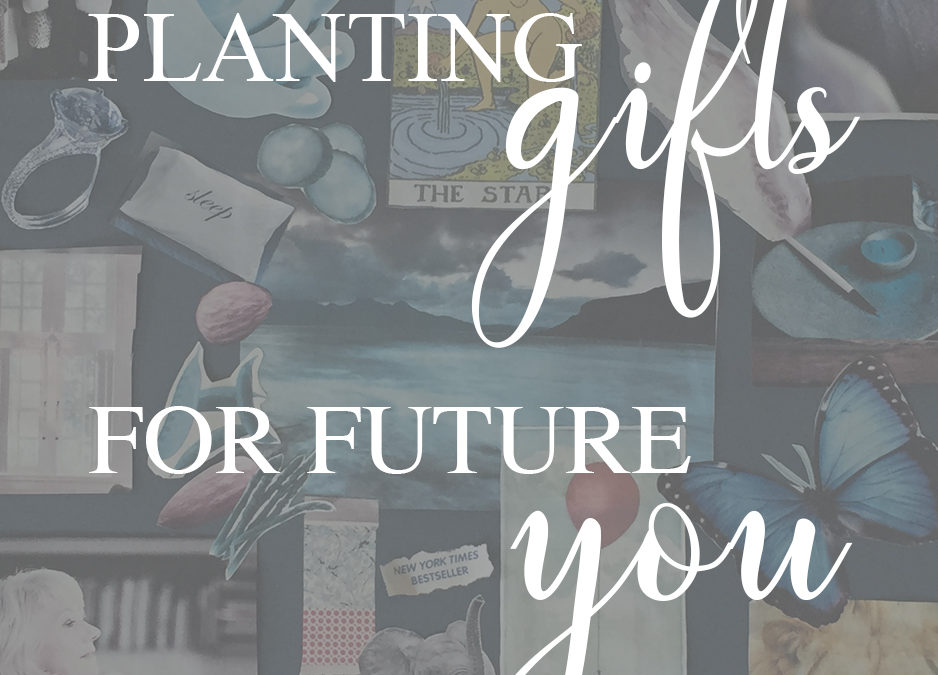 I had an epiphany yesterday when I was on the phone with my Queen Sweep Master Class.

In passing, I noted that so many of the habits we’re laying down don’t just serve us in the present moment, they’re actually a gift to our future self.

One of the women in the group spoke up and said, “Hang on. What you said about giving a gift to a future version of you– say more about that.”

I was taken aback for a second. I hadn’t really thought about it. But then as I started exploring the concept, I realized that it was HUGE– and it’s intrinsically entwined in ALL the work I do with my clients– and I had NEVER understood or articulated it in that way before.

But all the hard work my clients do is actually a labor of love…for their future selves.

They negotiate better salaries that shift their earning trajectory for the next decade.

They lay down streamlined habits that keep their houses organized and clutter-free so that they have enough room to welcome in a bigger, more adventurous life.

They transform their inherited beliefs and personal narratives and own their own truths so that the emotional DNA they pass on to their children is a little bit more whole, helpful, and resilient than what they received.

But it only looks big when you harvest it. When you see the fruits of their labor.

When you’re planting it, those seeds are TINY.

When they have big breakthroughs or hit glorious milestones, that’s actually the final culmination of thousands and thousands of tiny actions that they’ve taken invisibly, humbly, and faithfully.

Setting a timer and “swooping” for five minutes each day until decluttering becomes effortless.

Building courage muscles every time they deal with that annoying colleague and graciously but firmly hold their boundaries.

None of these things are glamorous in the moment.

Sometimes they even feel tedious, pointless, and stupid.

“I can’t possibly clear up this mess of a house in just five minutes.”

“How many times will I have to be triggered and work through this same issue? Again???”

Each one of those efforts feels so puny on its own. Just little dry husks in the dirt, plus a lot of muddy mess.

But over time, they take on a kind of momentum.

Together, they gather a kind of irresistible force that’s greater than the sum of its parts.

In other words, you reach a tipping point.

And things begin to BLOOM.

This is when you see the payoff for all that invisible work you did. Maybe you reach a big milestone, or maybe you just look around and realize that your New Normal is kind of phenomenal.

Most people in the world wait around for this moment to happen.

They want all that big ripe bloominess.

They don’t understand that it’s been building, quietly, in the dark, for years.

That at a point in the past, you made a decision to do things not just for the you in the moment but for for the later-in-the-day you, and tomorrow-you, and next-year-you, and ten-years-older-you.

You planted seeds that wouldn’t sprout for a while.

(And let’s be honest, to wildly mix metaphors for a moment, you can’t dig up the buried treasure if you didn’t bury it for yourself to find!)

So do something really kind for a-little-bit-later-version-of-you.

Ask yourself, what’s a gift you can give your future self?

It might be as simple as cleaning up the kitchen each night so that you can wake up to a clear counter every morning.

Or as nerdy as laying out your outfits for the next day.

Or as delightful as that dream vacation you’ll start saving for.

Or as long and laborious as that Ph.D. on the horizon.

Here’s one thing I know.

Your future self will be glad that you started today.

And all the best stuff happens down in the dirt.

*Note: I am grateful to Havi Brooks for her musings on this topic, and have taken pains not to appropriate any of her language.