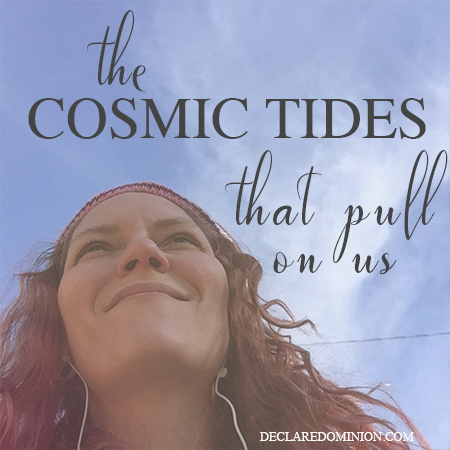 Oh, guys.  It’s been a doozy of a week, not just for me but for my clients and my friends.  People are getting clobbered.  Things are breaking.  Things are stuck, stuck, stuckety stuck.  And everything feels hard and heavy.  (Then there are a few people who are having brilliant new things break free—but they seem to be the ones who have already put in their time sitting in the stuck spot.)  I myself am careening from a heavy despair to great exultant leaps of joy…then crashing back down.  Then the leaping again!!!

What are we to make of this?

CLEARLY THE COUGH DROPS ARE POISONOUS. GO GET YOUR TINFOIL.

It’s easy to feel a little paranoid when so many things go so spectacularly wonky all at once.  Like surely some trickster force is at work, trying to mess with us.

So I consulted with my friend Dena DeCastro, who studies the stars and planets like they’re weather and helps explain some of the cosmic tides that might be tugging on us.  (If astrology seems crazy to you, think about the fact that the moon’s gravitational pull is strong enough to affect OCEANS.  It doesn’t seem that crazy to think that they would pull on us too, right?)

She had some very interesting things to say indeed.  For one thing, we just had a new moon, which can be challenging if you were trying to DO SO VERY MANY THINGS instead of RESTING.  Ahem.  That’s right.  Stop that.  (I was doing that.)  Also, we are still in the shadow of Mercury retrograde, so stick your fingers in your ears and chant “lalala I can’t hear you” with me.  (We need to have a laying on of hands for my computer, okay?  It hasn’t worked properly in months, and now it’s spread its contagion to my car, my online storage, and my credit card.  But back to the planets.)  There’s also a bunch of complicated things going on with Pluto, which means that we’re grappling with a few tiny little things.  Things like death, transformation, searing clarity, long-ignored things coming to light, and the breakdown of entrenched structures.  So basically, all the dark underwater waterlogged shipwrecks are coming up to be examined and seen while the bridges are also crumbling.  SOUNDS FUN, RIGHT???

Most of us just want to bob around happily on our little inflatable raft.  In the sun.  Maybe with a little umbrella drink.  No shipwrecks, no bridges.

Ah, but not you my lovely quince blossoms! You are here for depth!! For soul growth!! And for the orgasms, obviously!!

Sometimes soul work is so darned uncomfortable.  That is what this all seems to be about— some part of us grappling with the darkness, gasping for air, clawing its way into the light.  Asking us to be brave enough to look at our life with clear eyes and make some choices.

Maybe you choose to rest, to cocoon and go quiet.

Maybe you choose to walk away from something.

Maybe you choose to stay and fight with all of you.

Maybe you choose to fortify yourself with bliss and carry on.

Maybe you choose to say the brave thing you thought you could not say.

No right or wrong choices.  But look with clear eyes, loves– apparently it’s the season for it.

And whatever else you do, be sure you rest before the new moon, March 8th.  Because DENA SAYS.  (For more of Dena’s wisdom, and to read the full non-butchered version of her words, check out this wonderful post here.)

P.S.  Who’s going to Martha Beck’s Gathering Of Wayfinders weekend in Austin this April?!?!?!?!  I’m so excited–I’ll see you there!  And stay tuned for the scoop on the workshops I’ll be holding the day before–with some of my FAVORITE people–because you’re going to want to be there.