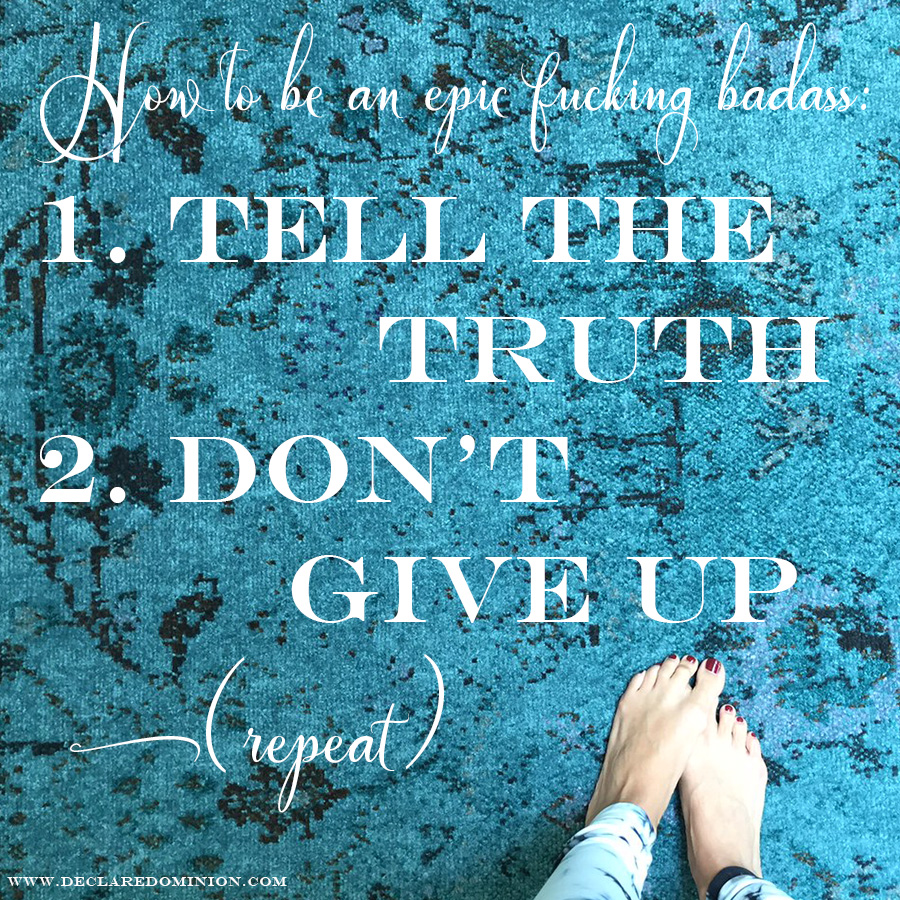 My friend’s voice on the phone was panicked.

“Oh my god!” she cried.  “I just listened to your call, and I’m freaking out because I think maybe I’m NOT an EFBA!  I’m actually a total loser!”

I just laughed at her.  This woman is SUCH an efba, you guys.  And if you’re new around here, EFBA stands for EPIC FUCKING BADASS.  (Last week I gave a free class where I talked about the five things that EFBA women do differently.  If you missed it, you can still get it here.)

This rockstar mama does things on any given day that would make a normal human blanch.  She gets more done before 8am than most people do in a week.

“Listen,” I reminded her.  “There are only two requirements to being an EFBA.  Tell the truth, and don’t give up.  That’s IT.  You’re in!  You qualify!”

Then I reminded her of 16 ways she’d already been an EFBA that week, and she chortled a little sheepish chortle, because the evidence was undeniable.

I see this ALL the time.  Women discount what they do, and focus ruthlessly on what was left undone.  It makes us exhausted and defeated.  You, for example.  I bet you’re an EFBA. I’d bet my favorite shoes on it.  But I bet you feel shy about claiming it.

It’s true that EFBAs DO do some pretty amazing things.

They manage their Finances exquisitely.

They have strong and loving Boundaries.

They are Awake to the beauty and the suffering of the world.

And they take action.  They DO things.

(See what I did there?  It’s an acronym!  I’m doing the happy lit nerd dance!)

But here’s the important thing.  They don’t always do those things perfectly.  No one does!

But what they do is they KEEP GOING.

People sometimes think it’s cocky or arrogant that I walk around calling myself an epic fucking badass.  But that phrase came out of a time in my life when I felt like anything BUT an EFBA.  I was scared.  I was running out of money.  I was dealing with an impossible situation.  I was getting pummeled from every direction, and I felt weak and pitiful and like curling up in a ball. 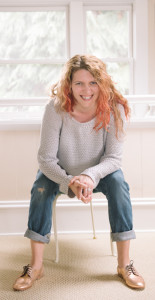 However, I have this child to feed, so that really wasn’t an option.

So I made a commitment that I would keep going anyway.  That I would step up and be the person who was required to handle my life– which at that point was nothing less than a truly heroic epic fucking badass.

And that moment of decision changed everything for me.

Do I always walk around feeling strong and triumphant?

Like the other day when I charred the grilled cheese and my daughter looked at me with utter disappointment and resignation and said, “It’s fine, mom.  I’ll just eat it.”

Or the other day when I had a hard conversation with someone who was really angry and really hurt by something I said.

Or any of the 500 times a day when life feels too irritating, frustrating, overwhelming, and sticky and goddamn disgusting to handle.

It doesn’t matter.  I already decided that I would be an epic fucking badass, which I define as:

1. Telling the truth, and

And so that’s what I do.  I tell the truth about what is going on, and then I take another step.

Both of those components are crucial to the equation.  You have to tell the truth about what is really happening, even if the truth comes out in a wail of despair or grief or fury.

But you look at that truth with compassion, and you move forward toward what you want.

You don’t sugarcoat, but you don’t wallow either.

But I’m not going to lie, you guys.  It’s not easy.  It can be lonely.  People around you won’t understand the choices you make.  It can feel harder than what you think you can manage.

And yet it can wink at you elusively with the promise of everything you’ve ever longed for.

The truth is, most of us need help in order to step into being the woman we always knew we could be.  We need support.  We need accountability. We need tender nurture but we also need the fierce tough love of other EFBAs who know what we’re capable of.

You can do it on your own.  But it’s longer, and harder, and scarier, and lonelier.  And it will cost you a lot more in poorly timed shopping therapy, whether your drug of choice is a new couch, that Chloe bag, or another quick-fix online class.

Most importantly, you’ll be tempted to give up RIGHT at the moment when you need to press on.

Which is why I created something to help you in your quest to be an EFBA.

It’s the 2016 EFBA Mentorship.  It’s different than anything I’ve ever done before.  There are three tiers so that you can pick the level that’s right for you, and it’s more accessible yet more luxurious than ever.  I am over the moon about it because I know it’s going to spark a powerful transformation for the women who are brave enough to take a chance on themselves this coming year.

Because here’s the deal, you guys.  EFBAs aren’t born.

And I created the Mentorship to help you become one.

Spots are limited, and they’re first-come, first-served.  So go read about it, and if you feel a tug of desire and longing, get your application in asap.
Ready, set, epicfuckingbadass.
much love,
Anna

How about that time that @epicdanger and I went on

All the best days start with morning pages. @julia

I was woken by a terrible horrible beeping from th

Oh go on and be your most mostest muchness self. W

It was a family day, a rainbow day, a painting and

All those years I believed that “true love” wa

We invited our kids to a fancy Valentine’s dinne

My intensely nerdy glee when my sweater and nails

On this last trip, a few days ago when I was flyin

Five years ago when the universe shocked me with a