That time I accidentally showed my unspeakables to the missionaries 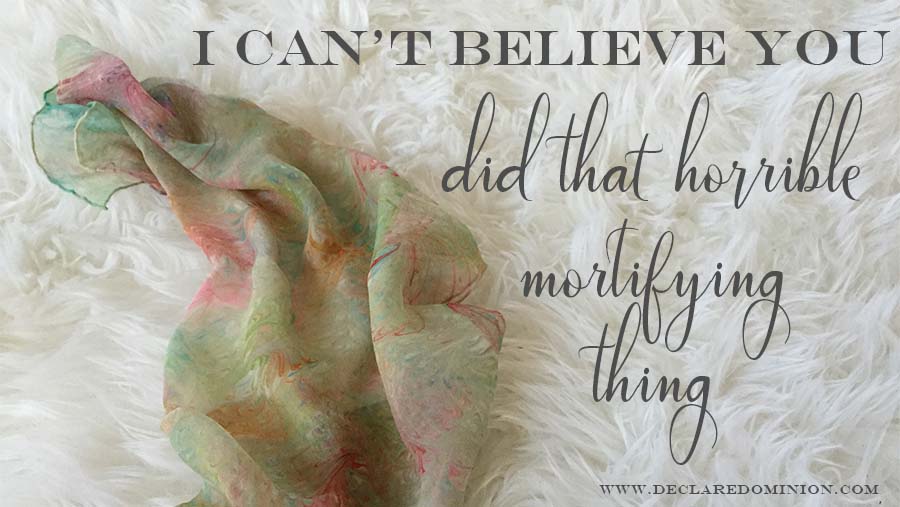 When I was a senior in high school, I was co-editor of our school yearbook. We had this brilliant idea for a picture story showing how we’d all grown from babies into toddlers and then ultimately into mighty and glorious 17-year-olds graduating gods. (Little did we know that we’d lose all our glory and be toddlers again the second we entered college.)
We had everyone bring in a picture of themselves at different ages, but we still needed that first tiny baby photo, so I grabbed one from my Peter Rabbit baby book.  (This was long before cell phones; we kept our photos in BOOKS and they were made of paper. Weird.)
It was a proud day when the yearbooks came out. Stacks and stacks of them, tangible evidence of our hard work and careful copyediting. Not an apostrophe out of place! I was sure of it!
Until someone came up to me and said, “I can’t believe you showed your VAGINA to the whole world!!”
For a second, I looked at her uncomprehending.
“You know, that naked baby picture of you!?!? That’s YOU, right?” She covered her mouth with her hand and smirked.
As I understood what she was saying, a great bubble of laughter welled up inside me.  Oh for heaven’s sake! It’s a BABY! A naked baby is the most pure and beautiful thing in the whole world! How can you be such a prude? In fact, it’s disgusting that you think it’s anything but innocent.
All that flashed through me for about 2.6 seconds–one very brief moment of benevolent amusement–before I was engulfed in a vortex of hot, blinding, sickening shame.
What had I done??? I had done something WRONG. And MORTIFYING. Oh my god, you guys, I had showed my VAGINA to the world. To the MISSIONARIES.
(I mean I hadn’t. As far as naked baby pictures go, this was pretty modest. But still.)
This was a religious school and community, run by deeply devout people who truly believed that Eve was the source of all the sin in the world. And there, stacked all around me, was permanent evidence in fresh-smelling print of my flagrantly female sexual nature, my most shameful female bits there for the world to see like I was some two-bit whore. (This was LONG before I went to Bryn Mawr and learned to reframe my sexuality, my agency, and my basic right to exist on this earth as a woman. Thanks, feminism! I owe you one!)
I felt a jolt of shame every time I looked at that yearbook. For years.
But recently I thought about it again. And this time, it made me laugh SO HARD I nearly peed my pants.
I mean seriously. It was a baby photo. The most innocent and lovely thing in the world. Suddenly the whole thing just seemed RIDICULOUS, especially the part where I felt embarrassed for so long.
And so I saluted that 16-year-old me. I was filled with respect and admiration for her. That girl who had no shame about that beautiful baby body she was born with. That fireball of creativity who didn’t even think about prudish concerns because she was too busy serving her artistic vision in one of the few avenues available to her. That bright spirit who didn’t stop to think about what other people might think, because she had bigger fish to fry.
I waved at her across the gap in time, and I welcomed her back into me.
Whoosh! That 16-year-old me rushed back into my body and I felt her energy and vitality quickening through my veins. It literally felt like I had a fresh supply of teenager juice pouring through me.
I’m no longer ashamed of that page in my yearbook.
In fact, I’m damn proud.
There was a glimmer in me, even way back then, of the EFBA woman I wanted to become. She was there, even though I didn’t see her properly at the time.  Even though I was ashamed of her for about a decade.
I was mortified of her, but she was never mortified of me. She was just waiting for me to catch up with her, rolling her eyes and wishing I’d grow my backbone a tiny bit faster.
I bet you have glimmers in your past too.
A time when you said something that got you in hot water.
A glorious confidence that made you sing, or dance, or hop up and down.
A truth that popped out of your mouth at an inopportune time.
A cause that you stepped up to support even though you were barely brave enough.
And maybe it didn’t go well. Maybe you were shamed or hazed. Maybe someone told you to stop showing off. Maybe your friends froze you out. Maybe you lost your nerve partway through.
That’s okay, dearheart. That was just your VERY FIRST TRY. You get so many more tries.
We’re taught to be ashamed of those moments, but I want you to sift through your past and salute that precious part of you. The one who already understood who you would become. The one who knew that you were a brave and bold soul, even if your body hadn’t caught up with you yet.
Honor those glimmers in you.
They are hints of the woman you are meant to be.
And I bet she’s one incredible epic fucking badass.
much love,
Anna
​P.S. I did a free call this week–the only one I’ll do all year–and I made a huge announcement about working together in 2016 and beyond. You can get the scoop here.