Flyjin Speaks: one year after the earthquake, a confession 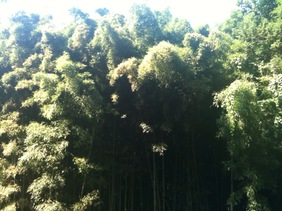 There’s a word for me, an ugly word, a word that made it into the Wall Street Journal.  They called me a ‘flyjin.’  It’s a clever play on the Japanese word for foreigner, ‘gaijin,’ and it rather less playfully means that I’m a fly-by-night.  A fair-weather friend.  Not someone you can count on when the chips are down.

You see, I was one of the hordes of foreigners who left Japan when the shit hit the fan.

One year after the earthquake, here is the collateral damage:

My home is gone forever.

My family is split in two.

But don’t let me mislead you: when the building lurched and roared on March 11, 2011, and I braced myself on my hands and knees over my daughter, and we waited for the obvious end to come—it didn’t.  The jolting slowed down.  The grating and groaning sounds ceased.  We got up off the floor, still shaking, utterly amazed to be alive.

We were 16 floors up in Tokyo, 200 kilometers from the real devastation.  Along with the rest of the world, I watched on T.V. as the tsunami rushed in and decimated the northern coast.  I felt the same horror, the same helplessness.

I was unscathed.  My daughter was safe.  Although our phones didn’t work for hours, the internet let me know that my friends and family were okay.  They had to walk through an eerily silent city to get home, bereft of public transport, but they were fine.

And even when the stores emptied of rice, flour, potatoes, vegetables, milk, water, toilet paper, and pretty much everything else, we were all still fine.

The rain that could have brought radioactive particles pouring down over the entire island of Japan never came.

Ever since the day I arrived in Japan with my parents, age five, I’d felt an invisible cord binding me to the place.  My blonde hair and blue eyes made me as much of an outsider as it was possible to be, but in my heart I felt connected to Japan.  Every few years we would return to the USA, and I would pretend to be a normal American kid.  But when my parents’ business was done, after a few months or a year, we would fly back to Tokyo, and each time we stepped out into the muggy, smoggy air I felt a vast relief—and a faint twanging sensation as I snapped back in place.  I fought the pull of that cord, stretching it across the ocean again and again—heading back to the USA for college, for work—but each time, after a little while, I would find myself zinging home to Japan.  It all felt so comforting: the whizzing bicycles and snorting mopeds, the crush of smells in the morning trains, the raucous beer-soaked celebrations waiting to erupt just below the constrained social façade.

It wasn’t like my adopted country felt a reciprocal connection: I had to move heaven and earth to get the proper papers to stay and work there as an adult.  But this last sojourn in Japan, I was there for nearly a decade.  There’s a strange thing that happens when you feel connected to a place that doesn’t love you back.  It takes on a kind of hold over you, like the haunting presence of an unrequited love.

Maybe I thought that if I wove my voice into enough T.V. commercials (I did voice-overs) and threaded my way through the city expertly enough, I would become part of its fabric.  I already knew that speaking the language like a native wasn’t the way to endear myself to a country that prides itself on its mystique.  My daughter was born there and my parents have been there for thirty years.  But I still felt like that dangling strawberry that hangs off those classic tomato-shaped pincushions: awkward, superfluous, a little ridiculous—but tightly connected by a thin red thread.

During the earthquake, that thread snapped.  Something in me floated loose, and I rose up from those four minutes of terror unmoored.  I thought the strange sensation was shock, horror, all the natural reactions to a big trauma—and those were there, of course.  But over the next few days I felt something else coalescing, something very calm, very sure.  The maternal lion in me roared.  I knew, with utter quiet clarity, that it was time for me to leave Japan and take my daughter with me.  I felt around inside myself, looking for the taut tether that always pulled me back to the country of Totoro and temples, subways and gardens, severity and beauty.  But some primal connection had been severed.

So I got on a plane.  I left behind my parents, my daughter’s father, and our apartment with all our things.  A massive aftershock rocked the airport just before we boarded.  No one knew what would happen: we didn’t know when they’d get food back in stores, or if there would be riots, or if the water would turn radioactive.  People slept with backpacks of emergency supplies and important documents next to their beds.

Some of my friends are still there.  A few left briefly and then went back, but some simply sat tight through all the upheaval.  My parents stayed to continue their work.  From their regular updates, it sounds as though Tokyo has settled into a ‘new normal.’  Compared to the massive upheaval up north, life in Tokyo requires mere tweaks: my friends look carefully now at food labels.  Even the gourmands now shop at Costco, where they can be sure the imported food is safe.  No one buys domestic baby formula; everyone buys bottled water.  (Except for those few who scoff and drink the tap water: apparently that simple choice is enough to cause judgment and raised eyebrows and determine whose kids go where for slumber parties.)  No one knows what is safe; no one can tell the difference between paranoia and naiveté; anyone with an opinion about radiation can find something that passes for scientific proof.  No one trusts the media, or the government.  Still, they stay.

I miss them intensely.  Some of them are angry with me; they think I’ve swallowed hysterical propaganda about the radiation.  Right after the earthquake, people posted on Facebook about ‘standing strong’ with Japan, differentiating themselves from flighty folk like me who jumped ship.  I admire their fortitude.  They are beautifully living up to the Japanese ideal of ‘gambare,’ which is an untranslatable concept that includes doing your best but also means gritting your teeth quietly no matter what, even if they are operating on you without anesthesia.  Nothing the WSJ could call me, and nothing my friends could post on Facebook, was worse than the words in my own mind: Traitor.  Coward.  Deserter.

My American friends couldn’t fathom why I felt guilty at all.  To them it was a clear choice:  any chance of radioactivity, no matter how slight?  Poof!  You come home.  They didn’t understand that Japan was home, and I missed it so much that I still found its flavors on my tongue: the bitter green canned tea on a train platform; the nutty flavor of Kirin or Ebisu in a yakitori shop; the cherry-red lights blinking through the smog.

But when I began to mourn, when the silent keening started up inside, another voice hissed in rebuke.   How dare I feel bereft?  I didn’t lose my house in the tsunami, and my loved ones were all alive and safe.  Everything I lost, I walked away from.

My daughter and I took one suitcase between us.  We stayed with my brother and his pregnant fiancée, on a mattress in their dining room, in a strange limbo.  We kept waiting for things to return to normal, for it to be ‘over.’  A month passed.  Slowly, without even meaning to, my little girl and I found ourselves sprouting roots into the damp loamy soil of Portland.  Trees budded; the daphne bloomed; and we unfurled too.

One year later, I can look out my window and see everything just on the verge of blooming again.  Even amidst the great green peace of our new life here, I still feel twinges of sadness.  Sadness, yes, and guilt.  Guilt for the friends I left, the goodbyes I didn’t say, the trucks of supplies I didn’t drive, the mud and rubble I didn’t clear.  Guilt that I didn’t stay even to bear witness.

In the worst throes of the guilt, I tried to reason with myself.  I have a child!  I’m not even licensed to drive a truck!  I would have been consuming more resources if I stayed!  But logic is defenseless against shame.  Compassion was the martial art I had to call on.  I began to think of it as real-life black belt training—parrying shame and turning it gently aside, again and again.  As I started finding compassion for myself, just brief glimmers at first, I felt the mother lion in me lie down to rest.  Through her peaceful eyes, I could see a woman doing the best she could.  And under my own soft gaze, my guilt transformed into tenderness.  Even the sadness felt almost sweet.

Because this is how it always is for the one who leaves.  There is always that quiver of ambivalence when you are the one who walks out.  It doesn’t matter whether you’re leaving a relationship that has begun to decay, or stepping out of an old toxic family dance, or taking a leap that leaves your colleagues behind.  You feel so happy—and so selfish.  You want to dance—but you don’t want to gloat.  And when the pangs of loneliness hit, it seems unconscionable to mourn something that you, yourself, left.

In light of all the lives lost and the homes shattered, I know it may seem self-indulgent to mourn the loss of a country I loved and left.  Still, I’m going to send this little traveling song out into the world, whistling a tune for all those who leave.  Sometimes the ground shifts.  Sometimes it’s time to walk away.  Sometimes we weep.  And sometimes we look out and see that everything in front of us is about to burst into bloom.